Let the Mirage be our Reality (Burning Man 2017)

Who are we at 4 in the morning when the drugs have worn off and your friends have all bailed?

I hadn’t been on the playa in two years. Two long years of self re-discovery and pain. The ever present pain of reality that is blast through your phone, never letting you get any rest no matter how often you disconnect from the world. But it wasn’t all bad. I found that partner I was looking for, I finished that degree I had set out to attain. I moved the fuck on, but where was I now? In a new city filled with the same old friends. New opportunities ahead of me; I back tracked. Back to Black Rock City, the place where God called my name, loud enough for me to hear it. Heartbroken and beaten I heard the call. But my minutes ran out, the number got disconnected. So now what? Just keep moving. After one long why the fuck did I come back out to this dusty shit show cry and a disco nap later I remember what I needed to have a good time. One loaded camelback, a full flask, a group of strangers (all Aussies for no reason at all) and the audacity to take the night at face value.

When you have to redefine yourself in a world of possibilities who are you now?

They call me Deacon Blues: I used to be a real good time, but then life happened. They broke my crown, locked me up, pumped me full of pills and told me I was wrong. Eventually I played along because they surely weren’t going to let me out of the hospital spitting the truth. It was a dark, dank, dirty and lonesome path back to my truth. Its hard finding your rose-colored glasses when the day has already broke. And so I kept my eyes closed. That which I see can only be perceived by me. No use trying to describe God to those who can’t even see themselves.

I could tell you about the art that I saw or the men that I fucked or the parties that I raged or that playa moment when Puff Daddy came up to me at Mayan Warrior but where would that get us? FOMO?

The music sucked, the art was mediocre, and I only slept with one guy who totally doesn’t deserve to get blasted on the internet. (P.s. the way to a girl’s heart is her taste in music and good food). Burning man is what you make of it, period. I skipped the Man burn to kick it with an old friend feeling like a crusty jaded veteran and I’m glad I wasn’t privy to the suicide. Having buried too many friends and lovers over their snap decision my choice to stay in camp was a blessing. The Man felt tiny and the Temple was too overpowering to make me deal with the demons I brought. I deal with them on a daily basis and saying pretend goodbye at a bonfire of other people’s tears felt cheap. So I took a nap. I still did the things that I enjoy doing; making my camp feel like a success, listening to friends who need support, spinning fire at sunrise, going solo to deep playa, turning strangers into friends, feeling like an idiot, and trying too hard.

How do you find your way back to that moment in time when everything was right, when the bliss ninny state held your ego in a warm embrace? Did you leave a map with directions: take two red pills, a 5th of whiskey, a left at the temple, second star to the right and straight on till morning?

But where the hell did I leave my map, somewhere between comfort and assurance. Without both I was able to see clearly. I spend most of my time making the spaces around me as lush and inviting as I can but life doesn’t thrive in a perfect environment, it stagnates. So we rally in the desert, in the most inhospitable environment we can find to lay down and die in. We create the oasis, let the mirage be our reality.

If you’ve found this site looking for Carnation. You’re in the right place.
Find me here

And my last Written work here
Scroll down for my general music blog. 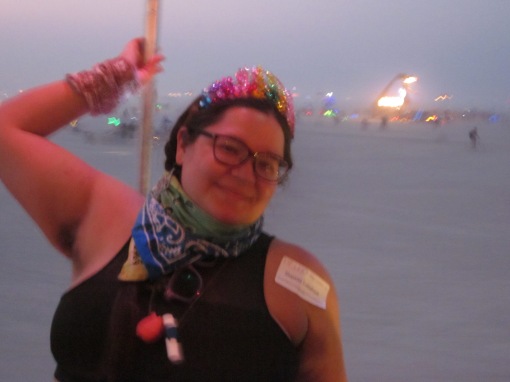